In today’s business environment, companies cannot settle for incremental improvement; they must periodically undergo performance transformations to get, and stay, on top. But in the volumes of pages on how to go about implementing a transformation, surprisingly little addresses the role of one important person. What exactly should the CEO be doing, and how different is this role from that of the executive team or the initiative’s sponsors? Based on a series of interactions we have conducted with nearly 100 ceo’s over the last couple of years—as well as our own experience working with companies—we believe there is no single model for success. 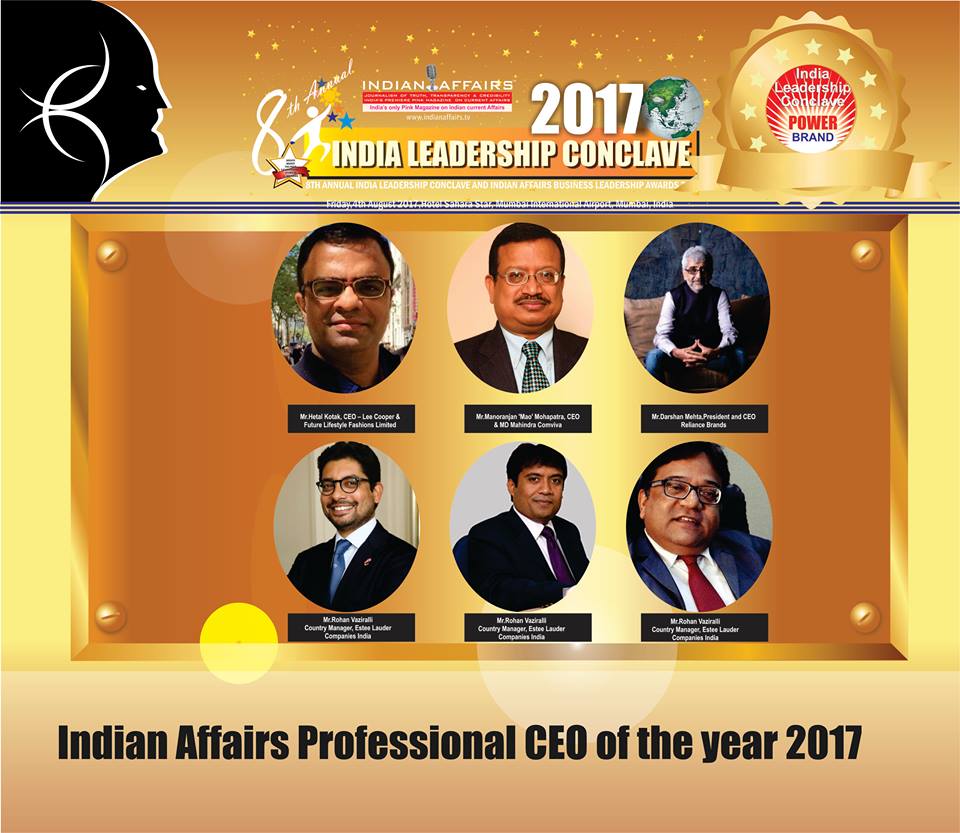 Moreover, the exact nature of the CEO’s role will be influenced by the magnitude, urgency, and nature of the transformation; the capabilities and failings of the organization; and the personal style of the leader. India Leadership Conclave 2017 nominations bring to the table six finalists who in some way or other have transformed the set up.
Indian Affairs Professional CEO of the year 2017
1.Mr.Hetal Kotak, CEO – Lee Cooper & Future Lifestyle Fashions Limited. (247)
2.Mr.Manoranjan ‘Mao’ Mohapatra, CEO & MD Mahindra Comviva. (248)
3.Mr.Darshan Mehta,President and CEO ,Reliance Brands. (249)
4.Mr.Rohan Vaziralli,Country Manager, Estee Lauder Companies India. (250)
5.Mr.Shital Mehta,CEO, Pantaloon Fashion Retail limited. (251)
6. Mr.Abhijit Pati,CEO,- Aluminium Business, Vedanta Aluminium Ltd. (252)
https://docs.google.com/forms/d/e/1FAIpQLSdeU4tp5y669tt1X-RlEvzt45OsQ2uxb7YKdzLcfcTlzXkAhw/viewform?usp=sf_link
India Leadership Conclave is india’s the Most definitive destination of leadership gatherings of the influential leaders of the country & abroad with a focus to continuously innovate & debate ideas that are complex & important. Over the last seven editions, India Leadership conclave has emerged not only as a leadership brand but also defied the age old practices of rules & traditions that are irrelevant, Indian Affairs, the flagship media brand of Network 7 Media Group is hosting the high profile 8th Annual India Leadership Conclave & Indian Affairs Business Leadership Awards, also known as ILC Power Brand in Mumbai on Friday,4th august 2017 at Hotel Sahara Star Mumbai, India in partnership with top govt agencies & apex trade bodies. More than 400 influential leaders of the country from politics to business, health to social & others have marked 4th august to attend. The conclave starts over a breakfast & is debating on a powerful theme “Transformation” to be addressed by the business tycoons, rebel leaders, authors, social & healthcare reformers in recent times. The day long conclave will culminate on the much awaited annual award ceremony in a glittering award night where who’s & who’s of india would be present.